Windermere House in the 1950s

From 1949 until 1961, my father, mother and I lived in a rented flat on the first floor of Windermere House, 110 Church Road. It was rather a strange experience, but one which I would not have missed for anything. During the war, many parts of Upper Norwood were severely damaged by the V1 Flying Bombs that, if they fell short of their targets in central London, hit the slopes of Sydenham Hill. When we moved there, the area around Windermere House still had a sense of dereliction. In 1947, a year after he was discharged from the R.A.F., my father, Henry Chessell, was appointed Organiser for Adult Education for the County Borough of Croydon and part of his job was to act as Warden of the newly established 'Windermere' complex, which comprised the grey brick Victorian house, a two-storey red brick hostel block and a number of linked Nissen huts. Windermere House had been built for his own use by the architect Sir M. D. Wyatt (1820-77) before it was occupied by the Principal of the Royal Normal College for the Blind, Francis J. Campbell (1832- 1914, knighted 1909) when, in 1871, the house and grounds together with the nearby Victorian villa, Walmer House, became the home of the Royal Normal College for the Blind. The College remained there until it moved to Shrewsbury before the outbreak of war. 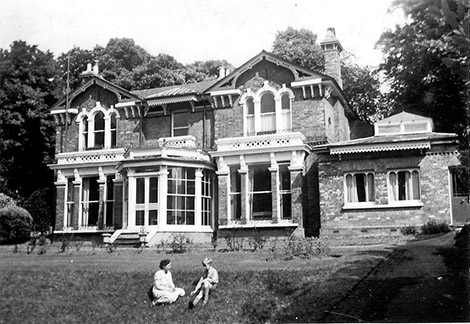 The hostel had once been the tuning house for teaching the blind pupils, each room being sound proofed and having its own piano. The individual rooms lent themselves to being used later on by the Council as single persons' residential accommodation for adult education courses. During the war and until 1949, the buildings had been requisitioned and used by the NAAFI, which provided catering, retail, leisure and facilities management support for the armed forces. The NAAFI had built the Nissen huts for food preparation, storage and recreational purposes; Windermere House itself had been used as the Officers' Mess. I remember seeing the house before it was handed over, when it was beautifully decorated and sumptuously furnished with thick pile carpets, luxurious leather seated lounges and with an atmospheric billiard room under a glass lantern roof.

After 1949, the standard of care dropped because the Council's funding was never sufficient to keep it in good condition and my father always had a struggle to get repairs done to the house. As a result, my father and mother were constantly coping with roof leaks and the hall/landing of the flat often had a series of buckets along it to catch the drips. Peeling plaster and other problems were worsened by a large, leaky, lantern light over the main staircase and the inner entrance hall of the house and by dampness and rot in the former billiard room. My mother used to say that nobody else would have put up with the conditions.

Problems of a different kind arose from two nearby houses, Grosvenor House and the former College building, Walmer House, both used by the Council after the war as 'half way houses' that were intended to allow problem families to begin a process of integration into society. Unfortunately, this created vandalism problems for the whole area. My bedroom window had a neat half inch bullet hole in the thick Victorian plate glass. I was rather proud of this and covered the hole with sellotape to keep out the draught. In one of the half way houses, there was a particularly notorious family with twelve children of different sizes but identical appearance who roamed the area with impunity. The problems became so bad that the Council had to surround all the Windermere buildings and grounds with a high concrete post and chain-link fence, surmounted by three strands of inward-leaning barbed wire, with similarly constructed padlocked entrance gates. It was like a prison compound but with the defences to prevent entry, rather than to prevent escape. I belonged to the 40th Beckenham Scout Group and the Scout hut, before it was later moved to St. John's Church, was accessed from Westow Street and was outside the fenced compound. During meetings, there was a constant barrage of stones against the wired windows and on the metal roof, reminiscent of wartime shrapnel.
Windermere House and its grounds were very attractive with terraced lawns, flower beds and trees, although the Royal Normal College's boating pond was no longer there. Because the Council's resources were stretched, my parents did their best to maintain the gardens. The lawns were used for displays of country dancing and I was able to use them for cricket with friends from school. There were trees to climb and swing from, particularly a large Catalpa or Indian Bean Tree with very large palmate leaves, which seemed to me to be a very exotic tree. There was an extensive bank of cultivated blackberries in front of the house on which I used to gorge and there was a large and heavy wrought iron 'rocker boat' left over from the days of the Royal Normal College. The rotted but still usable wooden seating for up to twelve blind children, still allowed us to swing backwards and forwards. Apart from the Council's adult education classes, rooms in Windermere House were let to outside organisations for meetings and activities and the Nissen huts were used for parties, wedding receptions, film shows and meetings. I can still vividly imagine being in the upstairs flat and hearing the strains of the Townswomen' Guild's weekly starter practice of 'Cherry Ripe, Cherry Ripe', the rendition of which was fruity in style, as well as in subject matter. Windermere House, the Nissen huts and other buildings were demolished in the 1970s and the sites incorporated into Westow Park. It is interesting that the tuning house still survives for day care and community use by Barnardos and has taken over the name, Windermere House. In 1961, my father took on an additional role as Warden of the Coombe Cliff Centre in Coombe Road, Croydon which meant a move to another flat 'over the job'. But that is another story.

Antony Chessell Antony Chessell is a retired Chartered Surveyor living in the Scottish Borders. His working life was spent in Croydon, the City of London and Aberdeen. He is married with two grown up daughters and is the author of The Life and Times of Abraham Hayward QC, 2009 and editor of A Small Share in the Conflict, 2009, both Lulu Publishing.