Extract from Musical Opinion - A Musical Pilgrimage in Vanishing London

Our illustration this month portrays the house of Thomas Attwood (1765-1838) the well known composer and organist of St. Paul’s Cathedral (1796-1818), in which building he is buried. After having studied under Nares and Ayrton, he was sent abroad in 1783 by the Prince of Wales (afterwards George IV), and received instruction from Lantilla at Naples and from Mozart in Vienna. He composed numerous musical works for the stage and much church music in which the style of his beloved master is palely reflected. The house, now known as ‘Roselawn’, is on the north side of Beulah Hill, Upper Norwood, a little west of Hermitage Road, and is the right hand house of the two shown in the picture. 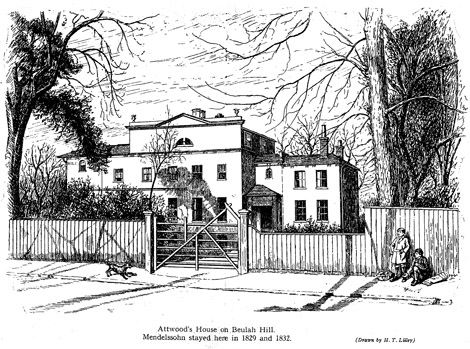 Attwood was one of the earliest to recognise Mendelssohn’s genius when he first came to London in the spring of 1829. Soon after his return to London from the memorable journey to Scotland and Wales in that year, Mendelssohn on September 17th was ‘thrown out of a cabriolet and very severely wounded in the leg’, being detained two months in London. Mendelssohn was much touched by the kindness of his friends. The hospitalities of Norwood were foreshadowed by the receipt of a hamper from Attwood: ‘on the top were splendid flowers, which are now smelling deliciously around my fireside: under the flowers lay a large pheasant: under the pheasant a quantity of apples for pies.’ He took his first drive on November 6th.

A week later he went to stay with ‘dear old Attwood’, at this time aged sixty-four, Mendelssohn being twenty or twenty-one. The house still stands, but with the addition of the wing on the right which now occupies the site of the habitat of Attwood’s white donkey. Mendelssohn writes: ‘In my bedroom luckily stands old Attwood’s music cupboard: and after finding the other day no end of Te Deums by Croft, twenty Anthems of Boyce’s, and Purcell’s Psalms, what should meet my eye in three big volumes but ‘Euryanthe: Score!’ That was a find!’ (Mendelssohn always thought ‘Der du die Unschuld kenns’” in G flat sounded like brass: and here he found it scored for three trombones, trumpets, two horns in E flat and, two horns in D flat!).

Klingemann describes a Sunday. ‘In Norwood lives one of the most distinguished donkeys that ever ate thistles: but he lives entirely on corn! A plump, milk-white animal, full of vivacity and talent, appointed to draw a very diminuitive four-wheeled vehicle. In the said vehicle sat Felix, who by and by got out of his carrriage and walked with us: and a caravan, consisting of one lady, four young men, the vehicle with the milk-white donkey and three dogs moved placidly up the hill and into the village’”.

The gate-bell. During his visit to Attwood’s, Mendelssohn had to return one evening to London to meet a party. He was extemporising, when the gate-bell announced the arrival of the carriage. The summons remained unheeded, but again the bell was rung repeatedly. Mendelssohn reluctantly started. Before going to bed (in London), he wrote ‘The Evening Bell,’ for harp and pianoforte (Miss Attwood played the harp), and sent it next day to Norwood. The gate-bell note (A) comes in frequently. The piece is published by Messrs. Chappell in original form and also for piano solo and duet. Mendelssohn again stayed at Norwood in the spring of 1832, after hearing of the death of his old master, Zelter; lilacs, apple-blossom, gymnastics in the garden. Here he composed part of his ‘Son and Stranger’ and his E minor Capriccio (Op. 16) is dated Norwood, Surrey, November 18th 1829 (i.e., first visit) though actually composed in Wales in the previous August. Mendelssohn dedicated his “Three Preludes and Fugues for the Organ” (Op. 37) to Attwood.