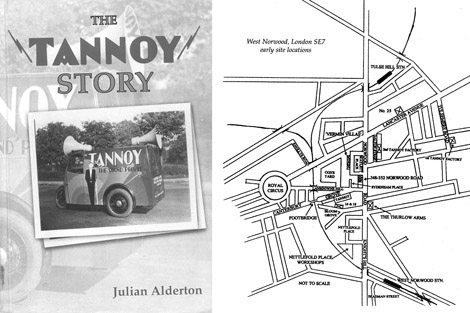 This book is very well written, and bristles with facts and anecdotes, some not too flattering. The reader must be warned, however, that although it reads well as an account of the life and achievements of Guy Fountain, the founder of Tannoy and much else, it includes a great deal of technical matter not easy to understand by a layman. That aside, it is a fascinating account of a man of enterprise and energy who identified problems and then would not rest until he, or one of his staff, had solved them. He took a leading role in the development and improvement of primitive (by today’s standards) equipment used to in the early years of radio broadcasting, and, for example, set out to improve the accumulators (lead-acid batteries) widely used until the all-mains wireless became available or until old-design radios could be converted for use with standardised mains electric supply. Fountain designed a particular kind of voltage rectifier using a tantalum alloy. From that a simple abbreviation formed the still-famous logo ‘Tannoy’ with its familiar fretted name on the front of loudspeakers. He was an energetic publicist for the name, and insisted, in the face of a lot of opposition, that it should appear prominently on all the equipment supplied. Thus it has achieved the accolade of an entry in a modern dictionary to mean a public address system and not just one provided by Tannoy. He then designed radio sets and eventually, when the technology of sound reproduction improved, radiograms in splendidly ornate cabinets. He somehow had the ability to attract and keep a long-serving (and long-suffering) group of talented engineers and technical experts in spite of their frustration with his interference at times. His company had its ups and downs, at one time going into receivership for a while, but it kept an unsurpassed reputation for high-quality public address systems which were adopted and used all over the world, and remain in use today. The reader may be familiar with proceedings in the House of Commons and House of Lords, and perhaps has noticed the small grills at ear level set into the bank of the bench seating. They are Tannoy loudspeakers to enable Members to listen to the speeches without the interference caused by nearby conversations. The suspended microphones are operated from a control console with a skilled operator able to cut out some microphones and concentrate on the one nearest to the speaker. The Speaker has an over-ride button to enable him to control the proceedings.

If anything Guy Fountain had too many ideas, and could not always distinguish between those that would yield profit for his company (and others he acquired), and those that were merely of interest to him and had no commercial development potential. Nevertheless he was a pioneer in several fields, and he, his engineers and technical experts have left an indelible mark on the pages of the history of radio and public address systems, in particular loudspeakers, of which the most famous is the ‘dual concentric’ design. That it all happened in a collection of buildings in various parts of West Norwood over a period of many years shows how, together with others like Paul Voigt, whose laboratory facilities Fountain used, the Norwood area fostered developments of this kind.. He would of course have been local also to the Crystal Palace, where Baird had his laboratory studios, until the night of its demise, and lived and worked in its shadow.